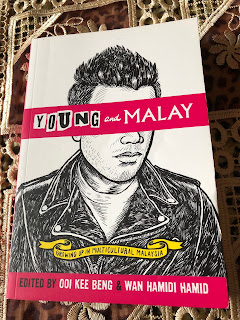 I would like to share my review on a book I recently finished reading. The book is titled Young And Malay (YNM). YNM is published by Gerakbudaya in 2015. I just got to know about YNM when I visited the Gerakbudaya bookstore during my vacation in Penang last June 2018. 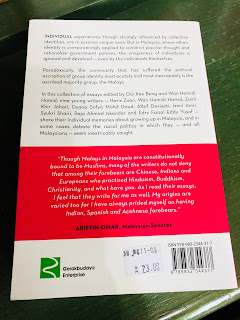 In YNM, most authors recollect their life experiences, growing up, making friends and socializing with the non-Malays, as well as express their political views. Reading YNM makes me understand and get a better picture why the Chinese, Indians, and even bumiputera Sabah and Sarawak are not happy with the Malays and the government. As some of us know, most non-Malay ethnics, especially the Chinese, are very hardworking people. But because the government classifies the Malays as bumiputera, non-Malays seem to be considered second-class citizens, as they do not get similar benefits or rewards from the government for their hard work. Such a practice creates a dependency mindset among the Malays and does not motivate them to work hard enough for country, race, and religion. So try to walk in the non-Malay shoes. Do you think this is fair?

My favorite article is “The real Malay dilemma” written by Zairil Khir Johari. In the article the author expresses his opinion on Malay problems and Malay Supremacy/Ketuanan Melayu. According to the author, most Malays nowadays are afraid to venture out of their comfort zone, have inferiority complex with other races (not willing to compete), depend a hundred percent on the government, and using Ketuanan Melayu as a weapon to protect themselves and scare the non-Malays. The author believes that Ketuanan Melayu is just a narrative used by Umno as a warning to scare the rural Malays in order to get them to continue supporting the party.  The author also believes that Ketuanan Melayu is actually Ketakutan Melayu/Malay Fear. The author relates Ketakutan Melayu with the Malays’ negative attitude of not willing/scared to compete with other races and international people, afraid to move out of their comfort zone and afraid to change. It is this Ketakutan Melayu that made the Malays be left behind compared to other races, and this is definitely not good for us. I do believe that Malays are rich when it comes to culture, heritage, and history. We must be proud of these and we must be able to make ourselves stand out in the crown. What I mean is “we must strive to be the leader and not just the follower”. The author criticizes the way we learn history during high school. He states that our history subject has failed to instill patriotism among youngsters. I agree.

I am also fascinated with Altaf Deviyati’s article, “Deconstructing the Malay narrative”. Altaf Deviyati shares the same opinion as Zairil Khir Johari on Malay problems. But besides Ketuanan Melayu, the author also states that Malays use Islam as a reason for them to not being able to compete with other races, as well as promote our culture and heritage to the world. According to her “Malays todays are allowing others to define them, our leaders say we need protection because we cannot compete, and so we agree. Our religious authorities tell us how to practice our faith and accept this without question”.  As a millennial Malay and Muslim, I wonder why we are said to be unable/scared to compete and cannot achieve the same success as other races. I believe if the Chinese and Indians can work hard and strive for the best, so can we. After all, we are all human beings and we are all gifted with different kinds of intelligence and talents from Allah SWT. In the Holy Qur’an, Allah SWT has revealed that never will the condition of a people change until they it themselves (with their own souls) (see Surah Ar-Ra’d (The Thunder): 11) So why must we sit and just accept everything defined by others without a question while we can work to change and achieve success ourselves?

Most authors in YNM criticize Umno’s leadership. Most authors are intelligent and honest enough to recognize that Ketuanan Melayu is only Umno’s propaganda to stay in power. It is not true that Malays need Umno and Ketuanan Melayu as a protection/shield to survive. Plus there is no such thing as “comfort zone”. A person needs to learn how to be strong and brave to survive in this real world and not try to stay safe always.  In fact, comfort zones never exist! Besides using Ketuanan Melayu as propaganda, the Malay ruling elites also use it to fulfill their greed. Most Umno leaders are not interested to help Malays. They are only interested in maintaining their status quo, individual power and wealth.

Dyana Sofya mentions in “Growing Up Malay In The Mahathir Years” that UiTM used to be known as Dewan Latihan RIDA (Rural and Industrial Development Authority). Dewan Latihan RIDA was established to provide education and professional training for poor Malays/bumiputera from the rural areas. However, most Malays who study at UITM today are not all poor rural Malays. Many of them are from elite background. In this way, they take the space or quota that was supposed to be given to poor Malays with bright minds to study in UiTM. So is the government actually helping poor Malays with this institution? Or is UiTM just an opportunity for privileged Malays to take advantage of the system? When I was pursuing my BSc Hons in Manchester, I met some Malay students with MARA/JPA/government scholarships who are not from poor background. In fact most of them are from influential Malay political elite families. I felt that this was indeed unfair and an abuse of the bumiputera privileges given by the government. It is because of the Malay ruling elite’s greed that the fate of the Malays at large never changes. The poor will forever be poor, while the elites will always be wealthy and powerful.

Overall, YNM is an awesome book. I will definitely give this book 10/10 rating. This book is a must-read, especially for those who are interested in studying political science and ethnic relations, as well as those working in civil service. Reading YNM gives me knowledge and ideas about my own race, our real problems and dilemma, and helps me empathize with Malaysians of other races. This book also offers us alternative perspectives to see and change ourselves in order to become a just and better society.

Since Malaysia is now reborn after PRU 14, I pray and hope for our country to become more harmonious and for all races to become really united. Together we shall build Malaysia into a better country. Malaysia is my country and I love Malaysia. Malaysia is my birth land, and this is where I will end my life.

Last but not least, Happy 61st Merdeka in advance and Sayangi Malaysiaku.

#YoungAndMalay #GerakBudaya #BookReview #FadimaMooneiraBlogspot
Email Post
Labels: Book Review
Fadima Mooneira
Fadima Mooneira is an author, content creator, blogger, and illustrator from Malaysia. She has an MBA in Marketing from the National University of Malaysia (UKM). Fadima also holds a BSC Hons in International Fashion Marketing from Manchester Metropolitan University. Fadima describes herself as artistic, creative, innovative, imaginative, and trendy. Fadima has a strong passion for creative writing and drawing. Fadima loves to write about lifestyle, pop-culture, edutainment, travel, and beauty. When it comes to drawing, Fadima loves to draw pretty girls, handsome boys, and cute things. As an author, Fadima has published three books - 2 collaborations (Sahabat, Kari Ayam Cinta) and one solo book (Book Of Lifestyle, Travel, Pop-Culture, and Edutainment). Fadima wishes and hopes to publish more books in 2021 and the whole future. Being a book author is her only dream.