Five Things That IU And Audrey Hepburn Have In Common 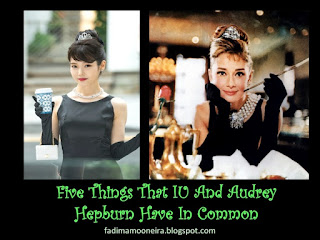 1) Both Grew Up in Poverty 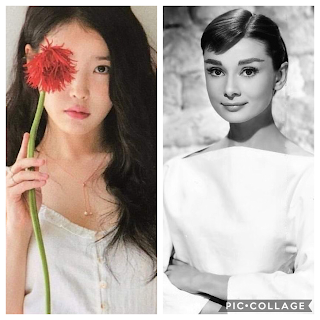 These two stars had a hard life during their younger days. Audrey Hepburn's father- J.A Hepburn-Ruston deserted the family when she was only eight years old. Hepburn grew up during the World War II era (1939-1945). Life wasn't easy for Hepburn and her family back then. They had to run from places to places to survive. Sometimes Hepburn had nothing to eat except flour and tulip petals. This makes Hepburn suffered from anemia.

IU's family was quite well off before they faced a debt that put them in financial difficulties. IU and her younger brother lived with their grandmother. Later, the 3 of them moved into a relative's house where IU faced verbal abuse from a drunk relative. IU was also conned and robbed when she first began as a trainee at an agency. The agency promised to make IU a star by tricking her into sending a large sum of money. IU was really heartbroken. The money that IU lost belonged to her grandmother who saves up little by little from selling small accessories.

However, having a hard childhood doesn't stop IU and Audrey Hepburn from achieving their dreams. It's their past that makes them hardworking, courageous and kind. 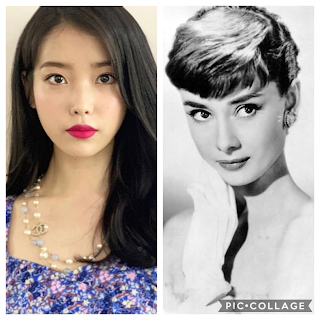 Growing up in poverty makes Audrey Hepburn and IU loves doing charities and helping those who are in need.

Besides, being an actress, Hepburn is also known as a humanitarian. After retiring from Hollywood, Hepburn joints UNICEF and became a goodwill ambassador in 1988. Hepburn traveled the world and raised national attention to the needs of starving, sick children in poor countries. As a child who grew up in the World War era, Hepburn understood too well what is it like to have a hard life and to be hungry.

Last week, IU was nicknamed the "Donation Goddess" by South Korean media. IU has done a lot of charity since she became a star. IU has donated a total of 600 million Korean Won ($496,359) over the last four years for children from low-income families. IU had also given scholarships to four outstanding students from poor families in need of collage. Plus she has also donated books and sent supporting education funds to the high school she attended. On the 8th of August 2019, the actress-singer has donated 10 million Korea Won ($8,3000) to the Seocho District Office to help the elderly who are in need.


3) Both Are a Gamine Beauty 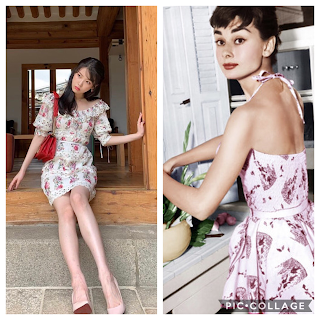 IU and Audrey Hepburn have the same kind of beauty. Both belong in the gamine category. What is a gamine btw? In the Oxford Dictionary, gamine means "a girl with a mischevious and boyish charm" Girls/ladies with gamine beauty usually look innocent and childlike compare to those who belong in the bombshell category. A gamine beauty usually has a sweet and innocent smile, Bambi eyes, and a petite ballerina-like figure. Just like IU and Audrey Hepburn.


4) Both Are Well Dressed 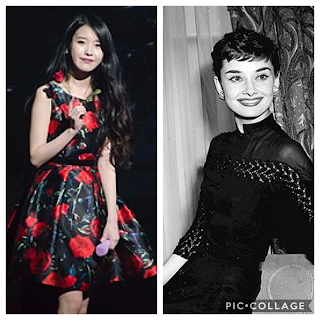 
5) Both Brings Inspiration To Their Fans 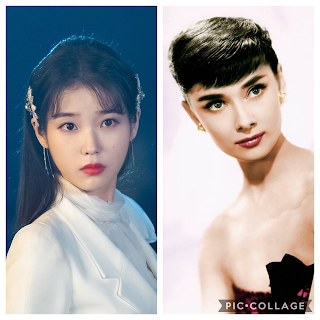 Audrey Hepburn and IU's journey to fame and success wasn't as easy as we think. These two stars had endured a hard life during their childhood, work hard to survive and also achieve success. Their past also makes them a person with a heart of gold and love helping those who are in need. Besides talent, beauty, and kindness, IU and Audrey Hepburn are also known for their humbleness.

Audrey Hepburn is a legend. I admire her for her talent, beauty, fashion, kindness, humbleness, intelligence. I watched all her movies and definitely love her inspirational quotes. Audrey Hepburn is my idol and my favorite fashion icon.

IU is one of the most successful celebrities in Hallyu entertainment. She is also one of the K-Pop girls I admire. Her life story, music, and acting have inspired her fans around the world. I hope that IU will also become a legend like Audrey Hepburn. Hopefully, in the future, IU's grandchildren and our grandchildren will see her the same way as we see Audrey Hepburn today. A legend and an icon that we all will forever love, admire and adore.

That's all for now.

Email Post
Labels: Hallyu Hollywood K-Pop Pop-Culture
Fadima Mooneira
Fadima Mooneira is a millennial author, content creator, blogger, and illustrator from Malaysia. She describes herself as artistic, creative, innovative, imaginative, and trendy. Fadima likes to write about lifestyle, pop-culture, edutainment, travel, and beauty. As an author, Fadima has published four books. Fadima has an MBA in Marketing from the National University Of Malaysia (UKM) & a BSC Hon's In International Fashion Marketing from Manchester Metropolitan University.