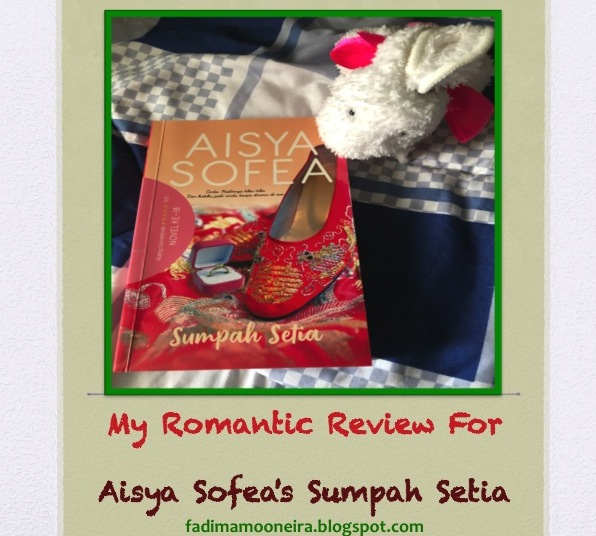 I just finished reading a Bahasa Malaysia romance novel titled Sumpah Setia. The novel is written by Aisya Sofea. Now I would like to share my review on the novel with you guys. So let's begin....... 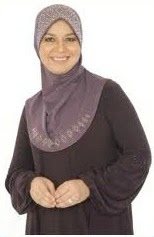 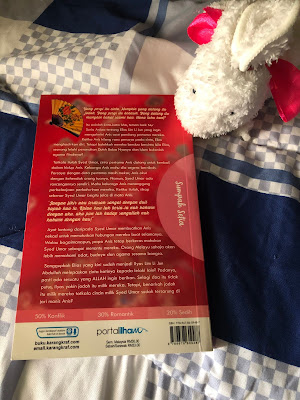 Sumpah Setia is Aisya Sofea's 18th novel. The story is about an intercultural romance between a Malay-Muslim girl named Anis and a Non-Muslim Eurasian Boy (Dutch + Baba Nyonya Chinese) named Elias Lim Li Jun. Anis and Elias first met each other by coincidence. Elias instantly falls in love with Anis and wants her to be his soulmate. To Elias, Anis is adorable. Elias also believes that Anis is the right woman for him although they are from a different race and religion.

In Chapter 11, Elias went for a job interview at the organization that Anis is working at. Elias succeeds in the interview and gets hired. He becomes Anis's immediate boss. Anis and Elias get close and they become good friends. At the same time, Anis's first love, Syed Umar enters the scene and tries to win her back. Anis first though that she is still in love with Syed Umar. She accepts him back. Syed Umar isn't a good guy. He is a gold digger and has his own agenda. Anis soon realizes that. Anis and Syed Umar break-off for the second time, and for good.

Elias confesses his feelings for Anis and his desire to revert to Islam. Anis also realizes that she loves Elias so much. Anis's mother, her two elder brothers, and sisters-in-law approve her relationship with Elias. But Anis's father, Dr.Mizan disapprove of their relationship. Dr. Mizan wants Syed Umar to be his son in law. Dr. Mizan doesn't believe in intercultural marriage. The old man believes that only a Malay man can be his son in law. This is the main conflict of the story.

However, I am glad that the story ends with a happy ending. Elias reverts to Islam and he changes his name to Ilyas Lim Abdullah. Dr. Mizan finally approves Anis and Elias's relationship. Anis and Elias get married and they have their happily ever after. 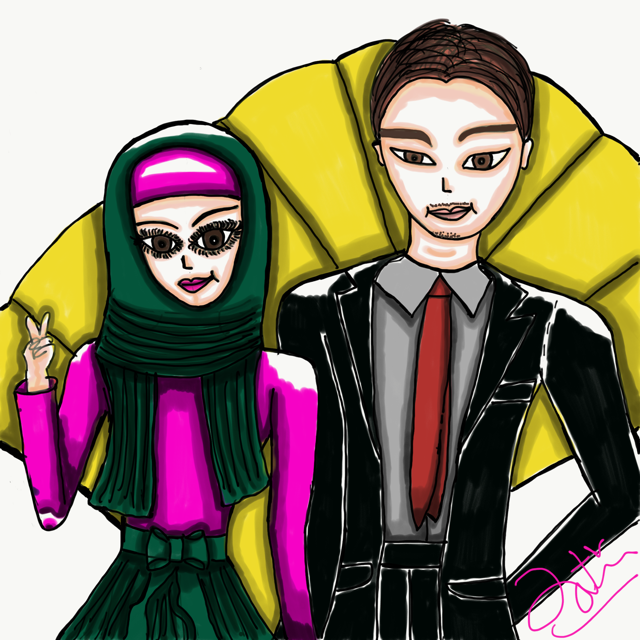 My illustration of Anis and Elias. What do you guys think? (Image: My artist IG @fmooneira_art)

The female protagonist in this novel is Nur Suria Anissa. Her nickname is Anis. Anis is a very pretty Malay girl. She is also sweet, innocent, humble, and kind. Anis has an adorable personality that makes people attracted to her. She is Dr. Mizan and Puan Yasmin's youngest child and the only daughter. Besides Elias, Anis is also very precious to her father, mother, and two elder brothers.

The male protagonist in this novel is Elias Lim Li Jun (he changes his name to Ilyas Lim Abdullah towards the end of the story). Elias is a Eurasian guy. He's a Dutch mix with Baba Nyonya Chinese. Elias is a gentleman, good looking, bright, intelligent, smart, charismatic, loving, and romantic. Elias has the desire to revert to Islam before he met Anis. Elias's elder brother, Musa Lim married a Malay woman and he reverted to Islam. Musa Lim became a better person after he reverted to Islam. This makes Elias interested to learn Islam too. He soon falls in love with the religion and decides to revert.

The antagonist for this novel is Syed Umar. Syed Umar is Anis's ex-boyfriend and first love. I hate Syed Umar! Of course, he is good looking. But he is a horrible guy. He's a gold digger, materialistic, and only loves money. Money and wealth is the reason why Syed Umar wants to return to Anis. Anis's family is quite wealthy. Her father, Dr. Mizan owns a hospital. Dr. Mizan is also the founder of Hospital Suria. Syed Umar believes that he will be rich and gets everything that he wants by marrying Anis. Such a shit!

My Opinion and Rating For Sumpah Setia 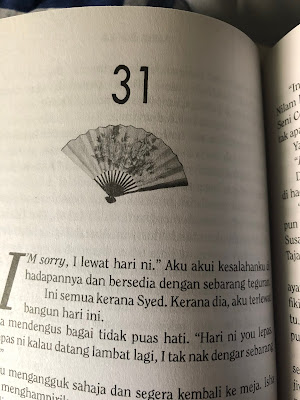 Besides the intercultural romance, Baba and Nyonya culture, I also liked the author used point of view 1 (POV1) in her writing. It makes me feel like I am communicating directly with Anis and makes me understand the character better. I also would like to credit my former colleague and the graphic designer for this novel - Ms. Syreena Jamil for doing a good job in designing the cover and the interior in this novel. The cover is red in color and it portrays the Baba and Nyonya culture. I also like how the graphic designer uses the Chinese traditional hand fan for the openings of every chapter in the novel. The traditional hand fan really symbolizes the Baba and Nyonya culture.

Most of all, I loved Elias Lim Li Jun's character. I think Aisya Sofea did a good job in developing Elias's character. Aisya Sofea portrays Elias as every woman's dream guy. As a woman, I have to admit that Elias has all the traits that I like in a guy. He is good looking, charming, charismatic, smart, intelligent, romantic, and have respect for woman. I also liked the way Aisya Sofea portrays Elias's physical appearance. Elias is tall, masculine, manly, has fair skin, small oriental eyes, and he also has dimples when he smiles. I always loved guys with small oriental eyes and dimples. The way Aisya Sofea describes Elias's physical appearance makes it easy for me to visualize him. I visualized Elias like Malaysian-Australian actor, Remy Hii. Hehehe.......except that Elias's hair color is soft brunette instead of black.

Overall, I rate this novel 7/10. For those who enjoy reading romance novels and loved intercultural romance, I highly recommend you to read Sumpah Setia. You will enjoy it.

Before I end this post, let me ask my readers some questions.......

Ok, that's all for now. Thank you for reading. Pls stay at home and pray.