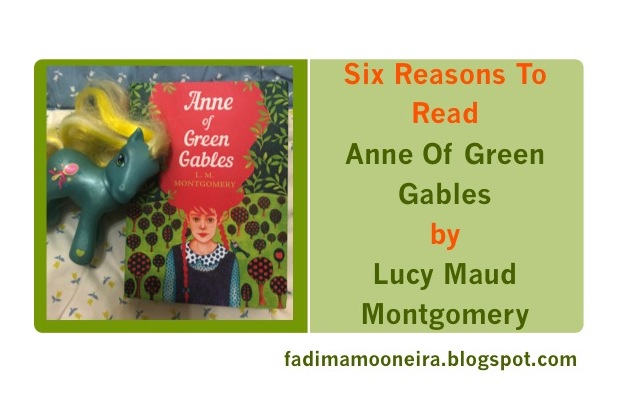 I just finished reading a famous classic literature novel that I've been wanting to read all this while yesterday. The novel is titled Anne Of Green Gables (AOGG). The novel was written by Lucy Maud Montgomery in 1908. AOGG is listed as all girls' and women's all-time favorite classic novels beside Little Women by Louisa May Alcott, Pride And Prejudice by Jane Austen, and Jane Eyre by Charlotte Bronte. In this post, I would like to share my simple thoughts on AOGG and six reasons for everyone to read this novel. Now let's begin with the author's short bio... 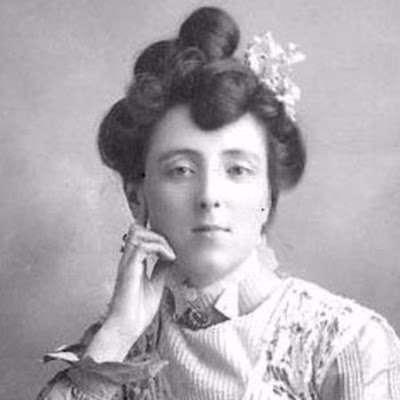 Lucy Maud Montgomery was born on the 30th of November 1874 and died on the 24th of April 1942. She is a famous Canadian author. Before she became an author, Montgomery was trained to be a teacher and she went to university (during that time it was rare for a woman to received higher education). Writing was a huge part of Montgomery's life. All of Montgomery's stories are based on her life experiences. Montgomery spent one year at Prince Edward Island, Canada that inspired her to write AOGG. AOGG was Montgomery's first and most popular novel. Besides AOGG, Montgomery also wrote Anne Of Avonlea (1909), Anne of The Island (1915), Anne's House of Dreams (1917), Rainbow Valley (1919), Rilla of Ingleside (1921), Anne of Windy Poplars (1936), Anne of Ingleside (1939), The Blythes Are Quoted (this novel was published in 2009 -67 years after Montgomery's death), 530 short stories, 500 poems, and 30 essays. 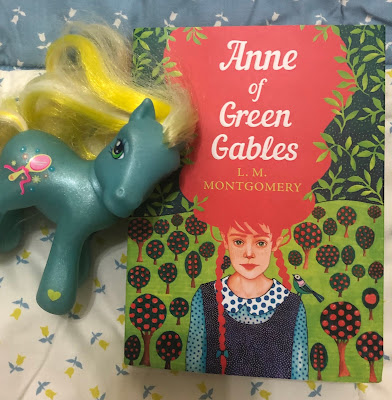 AOGG tells a story about a red-headed orphan girl named Anne Shirley. Anne was not like any other teenage girl during her time. She was full of enthusiasm and zest for life. The story begins by Anne being brought to Green Gables to be adopted by two middle-aged siblings - Matthew and Marilla Cuthbert. Matthew and Marilla first wanted a boy to help them with farm work. But the orphanage made a mistake by giving them a girl. Anne instantly won the heart of a bashful and reserved Matthew with her lively chatterbox personality. Marilla at first wasn't so keen into adopting Anne. But later, the old lady too fell for Anne's enthusiastic personality and began to love her as her own. Marilla believed that Anne was a very bright child. The novel takes us further with Anne's adventures and mishaps, her relationship with Matthew and Marilla, her friendship with Diana Barry, and her fights with Gilbert Blythe (who was also her love interest).

AOGG was once adapted into a movie in 1985 (I wasn't born yet). I once watched the movie with my cousins when we were teenagers. The movie is now available on YouTube. I will share with you guys the link at the end of this post. 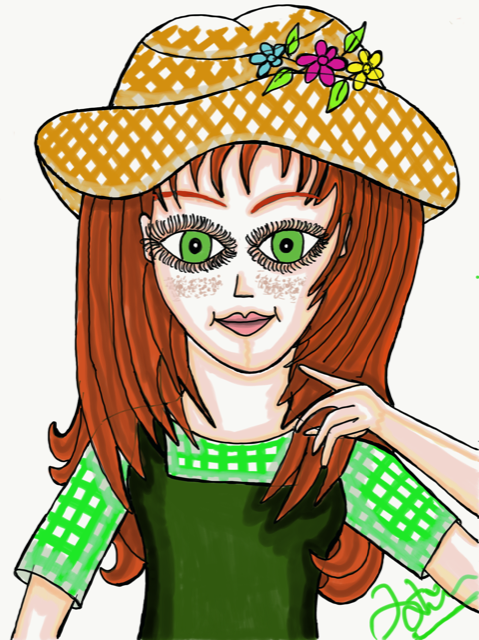 The protagonist - Anne Shirley. (Illustrations by me @fmooneira_art)

Reading AOGG makes me fall in love with Anne Shirley's character. I think Anne is a very bright, enthusiastic, imaginative, brave, adventurous, and confident girl. To me, Anne is one of the best female protagonists in a classic novel besides the March Sisters (Little Women), Elizabeth Bennet (Pride and Prejudice), and Jane Eyre. I believe Anne is a good role model for young girls. Besides that, I can also relate Anne to myself. Like Anne, I am also imaginative, enthusiastic, and adventurous, except I am not as talkative as her. Hehehe. Anne with Matthew and Marilla Cuthbert (Illustration by me @fmooneira_art)

Besides Anne's character, I also like her relationship with Matthew and Marilla Cuthbert. Matthew and Marilla are two loving siblings. Each of them has their own way of showing their love for Anne. Matthew is quite straight and open, while Marilla is a bit strict and not so open. Marilla only confesses her love for Anne towards the end of the novel. She tells Anne that she is grateful to have Anne in her life and love her like her own blood. In my opinion, Marilla is not like any other mother. Marilla is a strong woman. She raises Anne not to be an empty vase (just a pretty face girl). Marilla wanted Anne to be smart and good. In the novel, Marilla also mentions to Anne that "being smart and good is better than being pretty". Anne was quite obsessed to be pretty at the beginning of the novel. She wanted to be like one of the heroines in Camelot Tales. She even told Marilla to call her Cordelia. Anne believed that Cordelia was a very romantic and elegant name. As a reader, I like Marilla's character and I can relate Marilla to my mother. Like Marilla, my mother also raised me to be smart and good. Thank you, Mom. Because of you, I am now a strong woman. 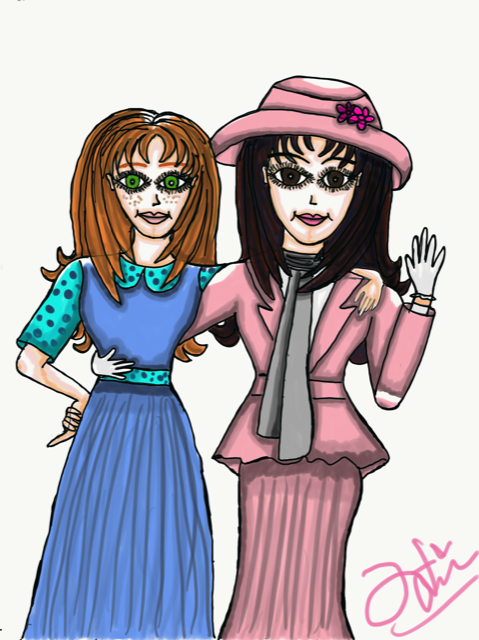 Anne and her bosom friend - Diana Barry (Illustration by me @fmooneira_art)

In the novel, Anne has a pretty bosom friend (BFF) named Diana Barry. Diana is a bit different from Anne. Diana is gentle, ladylike, feminine, and sweet. She is a girly-girl. However, that doesn't stop Diana and Anne from being BFF. Anne and Diana love each other dearly. They support, encourage, and motivate each other. I believe Anne and Diana are a symbol of true friendship. 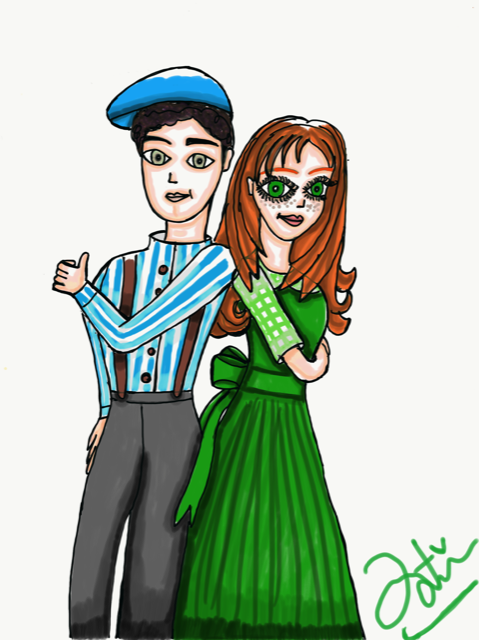 Anne and her heartthrob - Gilbert Blythe (Illustration by me @fmooneira_art)

A novel won't be complete without a heartthrob in it. In AOGG, Gilbert Blythe is the heartthrob. Not just girls in Avonlea had a crush on Gilbert, but readers too fall in love with the character. Gilbert is handsome, charming, and a dreamboat. Gilbert is also Anne's love interest. Although Gilbert has many admirers, he only has his eyes on Anne. I like Gilbert's character and I think Gilbert is the best literature hero. Gilbert is different from other guys in Avonlea. He doesn't just go for girls with a pretty face. Gilbert likes smart girls. He mentions that "smart girls are better than pretty girls". That's why Gilbert falls for Anne. Anne is more than just a pretty face. She is a smart girl and Gilbert's type. My cousin once said that "it is so good to be Anne. She is such a wonderful girl and has Gilbert Blythe liking her". Well, my dear cousin, I agree with you. All girls want to be appreciated for their inner beauty. I believe this is the reason why most female readers fall in love with Gilbert's character. 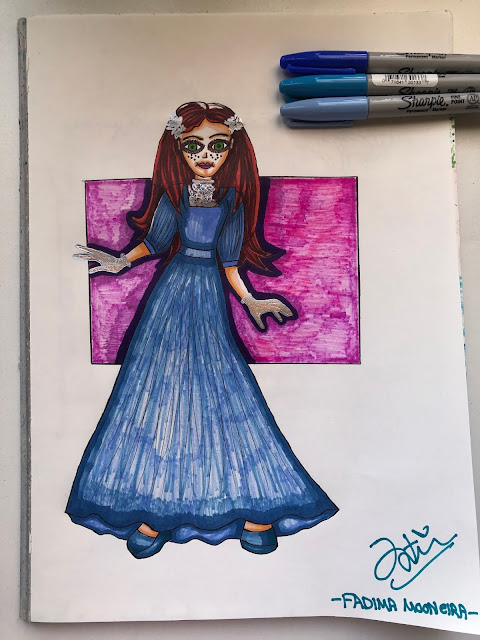 Montgomery portrays the 1900's fashion beautifully in the novel. This is one of the reasons why I enjoy reading AOGG. As a fashion graduate, I love reading and doing research about fashion history. Reading AOGG gives me a picture of the 1900's fashion. The way Montgomery describes 1900's fashion makes me fall in love with puff-sleeve-dresses, white-lace-gloves, and floral hats.

#6 THE MORAL MESSAGE FROM MONTGOMERY 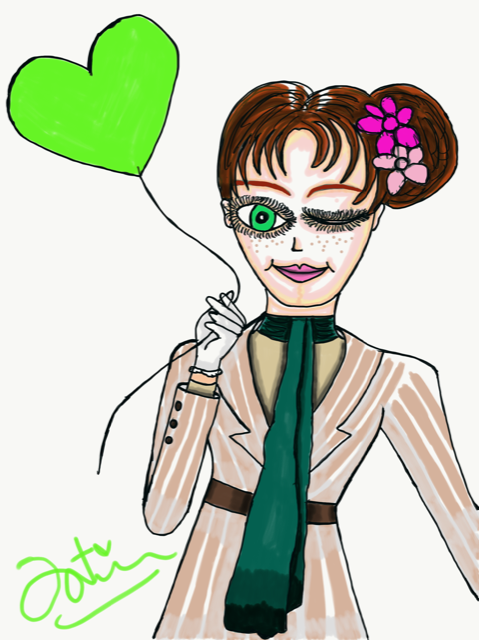 Anne more mature and stylish (Illustration by me @fmooneira_art)

At the beginning of AOGG, Anne Shirley is portrayed as a vain little girl, obsessed to be pretty. Like other girls, Anne was also not perfect. Anne wasn't confident with her looks and believed that her red hair and freckles were a curse to her. However, I believe this is a common thing for all girls. Like Anne, we were also obsessed to be pretty during our childhood days. We grew up reading fairytale stories about beautiful princesses and handsome princes. That made us wanted to be like these princesses, and we forgot that being smart and good is more important than being pretty. I believe this is the moral message Montgomery wanted to share with her readers in AOGG. Being smart is always better than being pretty. It is true. True beauty is inner beauty, not outer beauty. If a girl is smart and good, she will automatically be beautiful to others. Reading AOGG makes me realize that there is a difference between beautiful and pretty. Pretty means just a pretty face, but beautiful means overall (inner and outer beauty). Like Anne, she is not just pretty, she is a beautiful girl.

So these are the six reasons to read AOGG. Overall, AOGG is a wonderful novel for me. AOGG is now listed as one of my all-time favorite classic literature novels. I rate AOGG 10/10. I also highly recommend bookworms, literature lovers, and chic-novel lovers to read AOGG. Trust me, you will love it.

Before I end this post, I would like to ask my readers two simple questions. Has anyone of you read AOGG? If yes, what do you think about this novel? Pls, share your thoughts with me in the comment box below.

1) ANNE OF GREEN GABLES PART ONE

Email Post
Labels: Book Review Edutainment
Fadima Mooneira
Fadima Mooneira is an author, content creator, blogger, and illustrator from Malaysia. She has an MBA in Marketing from the National University of Malaysia (UKM). Fadima also holds a BSC Hons in International Fashion Marketing from Manchester Metropolitan University. Fadima describes herself as artistic, creative, innovative, imaginative, and trendy. Fadima has a strong passion for creative writing and drawing. Fadima loves to write about lifestyle, pop-culture, edutainment, travel, and beauty. When it comes to drawing, Fadima loves to draw pretty girls, handsome boys, and cute things. As an author, Fadima has published three books - 2 collaborations (Sahabat, Kari Ayam Cinta) and one solo book (Book Of Lifestyle, Travel, Pop-Culture, and Edutainment). Fadima wishes and hopes to publish more books in 2021 and the whole future. Being a book author is her only dream.