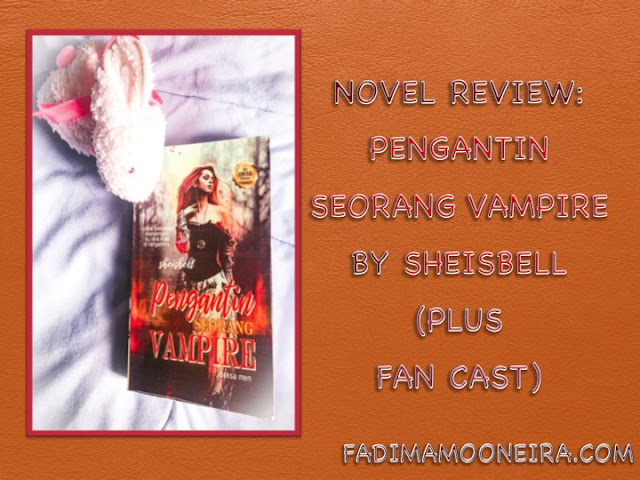 How are you guys doing? I hope you guys are doing good. Today, I'll be sharing with you guys my review of an erotica romance novel I just finished reading last two weeks. The novel is titled Pengantin Seorang Vampire, and it is written by Sheisbell. Besides review, I will also include a fan cast at the end of this post. I hope you guys are excited to check out the fan cast. So please read this review till the end. Now let’s begin with the author’s bio.

Sheisbell is a Malaysian indie novelist. She is a very creative and imaginative storyteller. Most of her novels are unique and different compared to most Bahasa Malaysia novels in the market. If you guys want to know more about Sheisbell, you can visit her blog, Wattpad, and other social media accounts by clicking the links below. 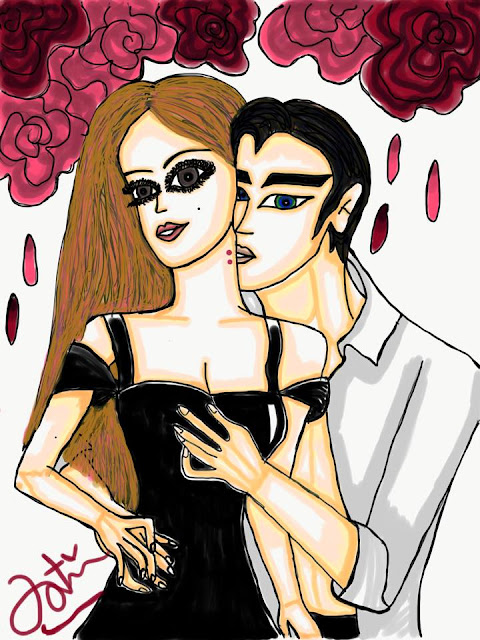 Sir Armand is a 900 years old vampire in the form of a 30-year-old man. His time in this world is almost over. But Sir Armand wishes to live for another 100 years. Plus, he also has to save his younger sister’s unborn child. To achieve his goals, Sir Armand must find a bride and make love to her. According to the vampire’s bible, Sir Armand must marry a human. In fact, the vampires' shaman, Saturn has already chosen a bride for him.

Amerlind is a sassy but yet innocent and naive human girl who is chosen to become Sir Armand’s bride. The vampire clan invites Amerlind to the vampire’s mansion at the beginning of the story. They tell Amerlind that the mansion is given to her by her late Auntie who recently passed away. Amerlind is delighted. She always dreams to live in a huge mansion like a fairy tale princess. But to become the new owner of the mansion, Amerlind must stay there for 90 days. Since Amerlind wants to become the new owner so badly, she instantly agrees with the rule. 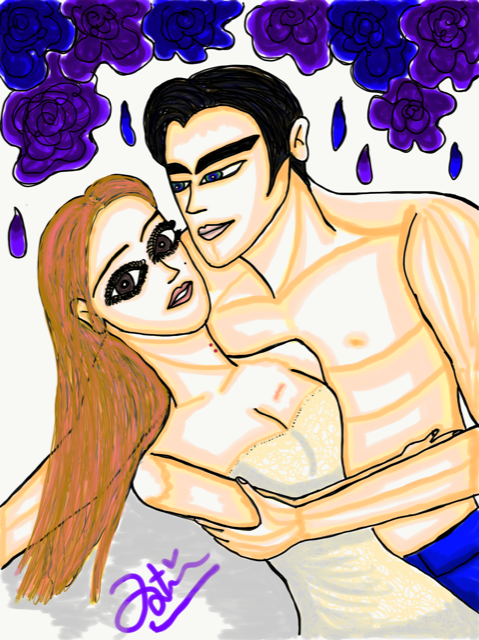 Amerlind meets Sir Armand on her second day at the mansion. To Amerlind, Sir Armand is very handsome, dashing, and charismatic. They instantly fall in love. But at the same time, Amerlind meets Ryam.

Ryam is the villain and antagonist of this story. He was once Sir Armand’s shadow. When Sir Armand became a vampire, Ryam was separated from him. At first, Sir Armand and Ryam were BFFs. They always do things together. But suddenly, a beautiful fairy named Scarlet entered Sir Armand’s life. Sir Armand and Scarlet fell in love. Ryam was totally forgotten. Ryam was not happy with this. He raped Scarlet and she got pregnant with his child.

Scarlet died after giving birth. Sir Armand was not happy with this. He tried to get rid of Ryam by trapping him in an underground cell. But Ryam escaped. Ryam swore that he will not let Sir Armand be happy. He harmed all the girls that Sir Armand loved. He killed them one by one.

Now, Ryam wants to kill Amerlind. So Amerlind is not safe in the mansion. Will Sir Armand be able to protect Amerlind from Ryam? And Amerlind did not know that Sir Armand is a vampire. Can she accept him for who he is if she knows the truth?

MY REVIEW OF PENGANTIN SEORANG VAMPIRE 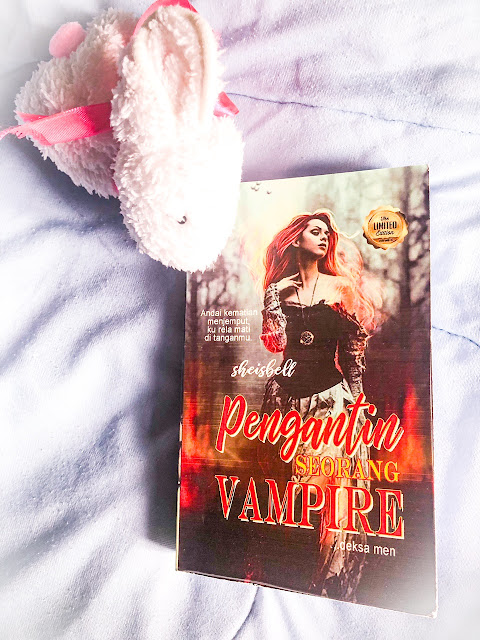 I think Sheisbell is very creative in her storytelling and world-building. I also like the way she creates her characters. All of the characters in PSV are good enough to make readers engage in the story.

I rate this novel 9/10. And I would highly recommend this novel to fellow bookworms who like vampire romance and dark fantasies. I believe PSV will be a good book to read during this Halloween season.

Since PSV is a very enjoyable read, I believe this novel is chic enough to be adapted into a movie or drama series. Therefore, I decided to include a fan cast in this review. Not let’s check out my fan cast for Pengantin Seorang Vampire…

I wish the movie or drama version of PSV to be an all-Asian setting. So I’m going to fan-cast Asian actors and actresses for PSV. 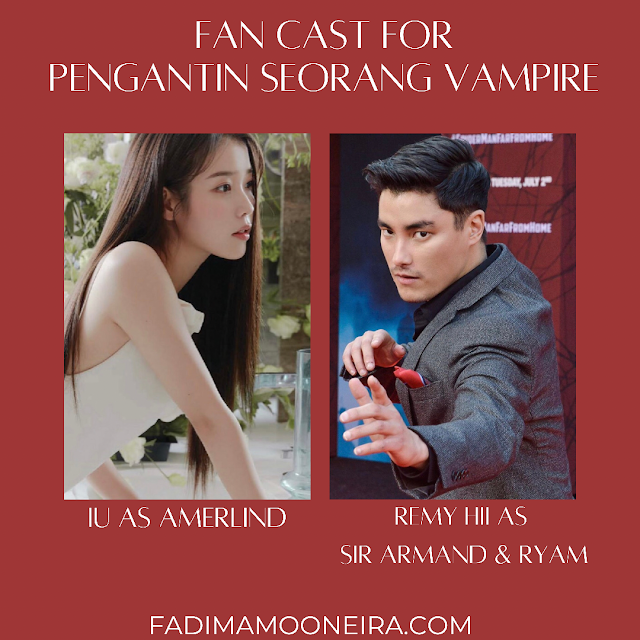 Amerlind is a sassy yet innocent and naive human girl who is chosen to become Sir Armand’s bride. She’s also a free-spirited and open-minded kind of person. Amerlind always dreams to live a life of a fairy tale princess. The author describes Amerlind as a pretty and petite girl with fair skin.

I believe Hotel Del Luna’s IU is perfect to play Amerlind. Like Amerlind, IU is also sassy, pretty, petite, and has fair skin. I definitely can see IU as Amerlind when I was reading this novel.

Sir Armand is a 900 years old vampire in a form of a 30-year-old man. He is handsome, tall, masculine, and very manly. He has dark hair and fair skin. His eyes can change color – from blue to green, from green to blue. The author portrays Sir Armand as a very charismatic, enigmatic, and mysterious man. He has a strong aura.

I think Marco Polo’s Remy Hii will be suitable to play Sir Armand. Like Sir Armand, Remy is also charismatic and manly. I believe Remy has the same charisma and aura as Sir Armand. Plus, Remy is a very versatile actor. He can channel all kinds of roles. I’m sure he will carry Sir Armand’s character well and make it a phenomenon.

Ryam is the villain and antagonist of the story. Ryam was Sir Armand’s shadow. And he has the same features as Sir Armand. Except his eyes is yellow in color and his skin is darker. Since the author makes Sir Armand and Ryam look alike, I think it will be cool to have Ryam’s character play by Remy Hii too. This will be a good challenge for Remy. And it will take his acting to another new level. 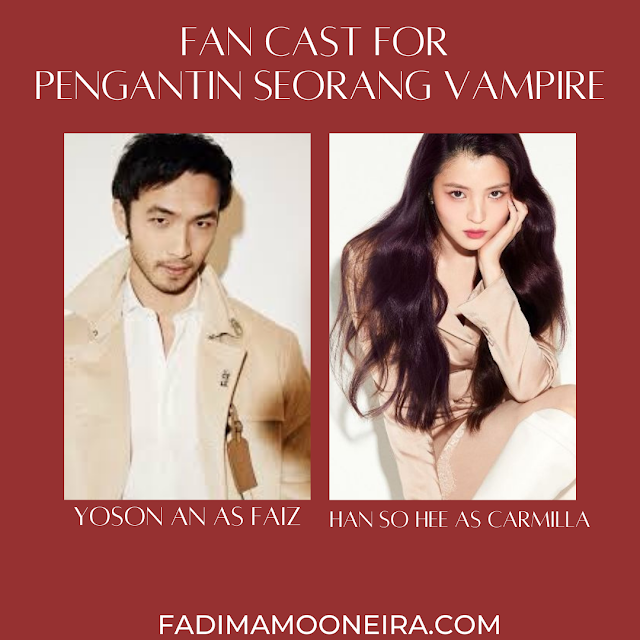 Faiz is Sir Armand’s best friend and brother-in-law. He is strong and fierce, but yet cool and a loving husband. Faiz is the leader of the vampire’s army. Faiz loves his wife, Carmilla dearly. I believe Mulan’s Yoson An will be perfect for this role.

#4 HAN SO HEE AS CARMILLA

Carmilla is Sir Armand’s younger sister and Faiz’s wife. She is a 400 years old vampire in the form of a 21-year-old girl. In the story, Carmilla is expecting and she is desperate to save her child. She annoys Sir Armand a lot. Carmilla is beautiful, seductive, and sluttery.

I think South Korean actress, Han Soo Hee is the most suitable to play Carmilla. I can see her in Carmilla’s character. 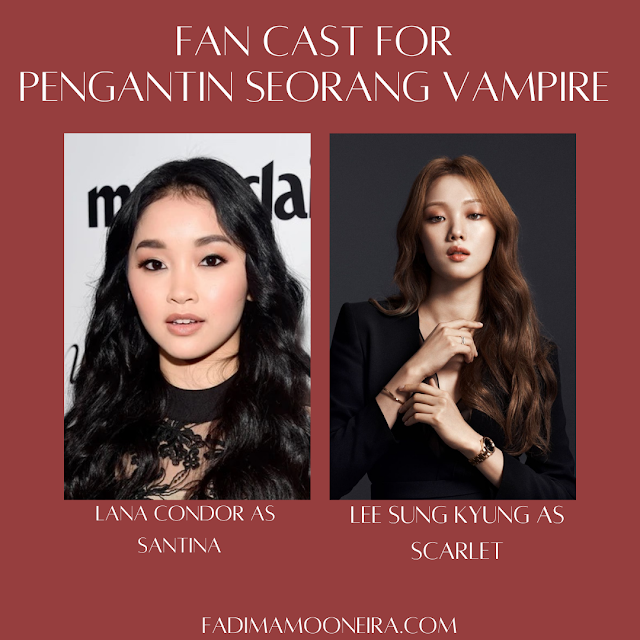 Santina is a kind-hearted and friendly vampire girl. She is kind to Amerlind. They became best friends. I think To All The Boys I’ve Loved Before’s Lana Condor is suitable to play Santina. I can see Lana in Santina’s character. Yeah, Lana will be perfect for Santina.

Scarlet is Sir Armand’s first and former lover. She’s a beautiful fairy who came to earth just to be with Sir Armand. Scarlet died after giving birth to Ryam’s child. Towards the end of the story, the author reveals that Scarlet is actually Amerlind’s ancestor.

I think South Korean actress and model, Lee Sung Kyung is perfect to play Scarlet. I can see her in Scarlet’s character.

Ok, so this is my review and fan cast for Sheisbell's Pengantin Seorang Vampire. Before I end this post, I would like to ask my readers two questions...

1) Has anyone read Pengantin Seorang Vampire?

2) If yes, what are your opinions of this erotica romance novel?

Last but not least, I would like to thank my BFF, Maddy for lending me this novel. Thank you, Maddy, for introducing me to Sheisbell and opening up my world. I wish to read more of Sheisbell's works after this. And I can’t wait to have another Girl’s Day Out with you, babe.

Thank you for reading. I hope you guys enjoy my review and fan cast. See you guys again in my next post.

Email Post
Labels: Book Review Edutainment
Fadima Mooneira
Fadima Mooneira is an author, content creator, blogger, and illustrator from Malaysia. She has an MBA in Marketing from the National University of Malaysia (UKM). Fadima also holds a BSC Hons in International Fashion Marketing from Manchester Metropolitan University. Fadima describes herself as artistic, creative, innovative, imaginative, and trendy. Fadima has a strong passion for creative writing and drawing. Fadima loves to write about lifestyle, pop-culture, edutainment, travel, and beauty. When it comes to drawing, Fadima loves to draw pretty girls, handsome boys, and cute things. As an author, Fadima has published three books - 2 collaborations (Sahabat, Kari Ayam Cinta) and one solo book (Book Of Lifestyle, Travel, Pop-Culture, and Edutainment). Fadima wishes and hopes to publish more books in 2021 and the whole future. Being a book author is her only dream.