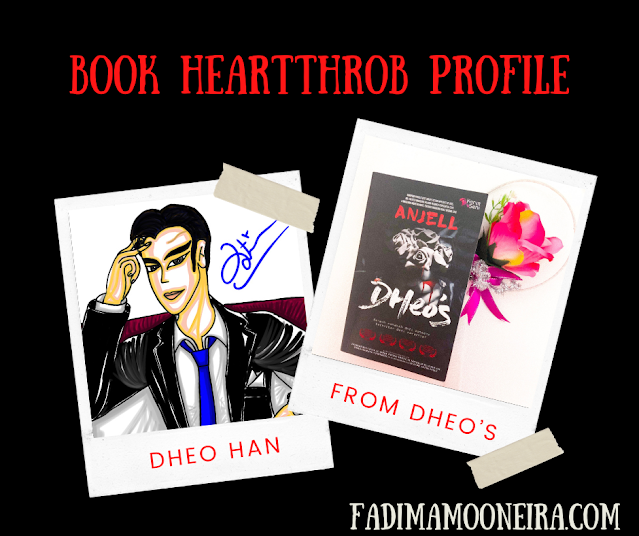 Welcome back to Fadima Mooneira. The Book Heartthrob Profile is back with a brand new book heartthrob that will surely swoon you. For this month's book heartthrob profile episode, I'm going to share my analysis of Dheo Han. Dheo Han is a book heartthrob created by Malaysia's no.1 bestselling romance novelist, Anjell for her sixth novel, Dheo's. Now let's begin the analysis with Dheo Han's profile... 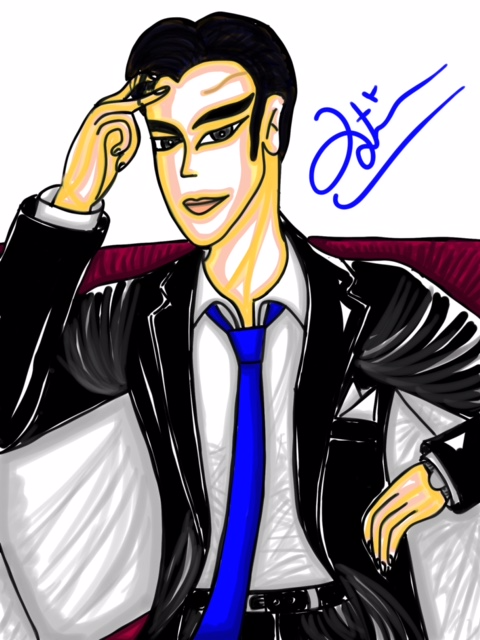 AGE: 28 years old (It was mentioned by the author)

NATIONALITY: Malaysian (Dheo Han was a Eurasian. His father was a Chinese-Malaysian, while his mother was an Italian)

OCCUPATION: He was a businessman and a hotelier. He was the owner of La Prince Hotel (a luxurious fictional hotel created by Anjell for her fictional world)

HIS GOALS: Dheo wanted to get rid of the D'Ambrusio clan (a mafia clan), and lived a happy normal life with his wife, Rose.

Anjell portrayed Dheo Han as a morally grey man with an iceberg persona. He was cold but beautiful. He hardly smiled and always showed people a poker face (especially to his enemies). Most people were scared of him. He was also very mysterious and hard for others to read.

But deep down, Dheo was actually a very kind-hearted, romantic, and tender-loving man. He loved Rose dearly with all his heart. And did everything to get her in his arms again. At the beginning of Dheo's, Rose woke up from a one-year coma. She had a tragic accident before the story begins. When Rose woke up from her coma, she doesn't remember anything that happened to her. All her memories were lost. And sadly, she doesn't remember Dheo Han at all. 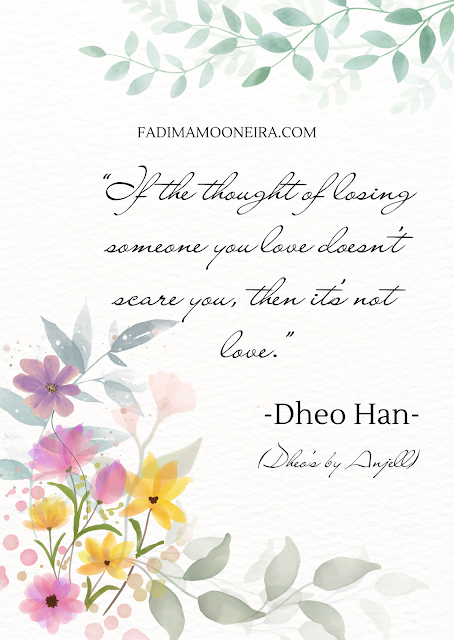 One of the romantic love quotes in Dheo's ^_^

Rose was everything to Dheo. And she was worth fighting for. Always. (That's what Dheo said). So Dheo worked all-out to get Rose in his arms again. He worked hard to make her remember him and fall in love with him again. This was one of his goals in the story after getting rid of the D'Ambrusio clan.

Besides being kind-hearted, romantic, and tender-loving, Anjell also portrayed Dheo as a very confident, charismatic, charming, suave, bold, and intelligent man. He is an alpha male hero indeed. Oh, how I wish I will meet someone like Dheo Han one day. It's so nice to have a husband who loves you with all his heart and is always willing to face the storms with you. 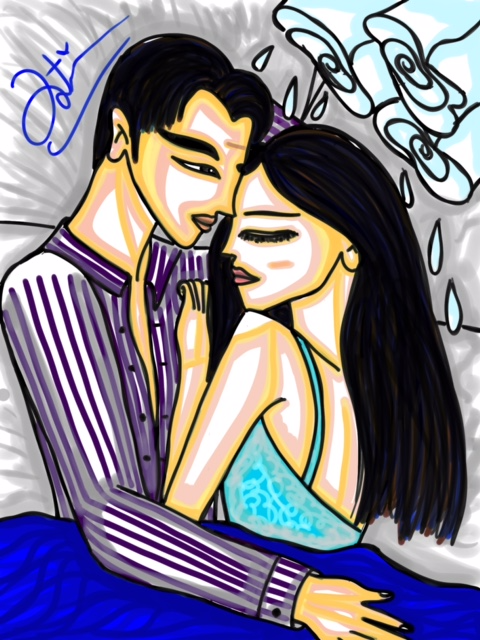 Dheo Han was an extremely handsome man even though with a cold persona. He was tall and all-masculine. He had dark hair. His eyes were hawk-like and black in color. He had a beautiful scar on his left forehead. The scar did not ruin Dheo's handsomeness at all. That's why the author described the scar as beautiful. The scar also had a lot of meaning to Dheo's life and backstory. I will explain that in Dheo's backstory. 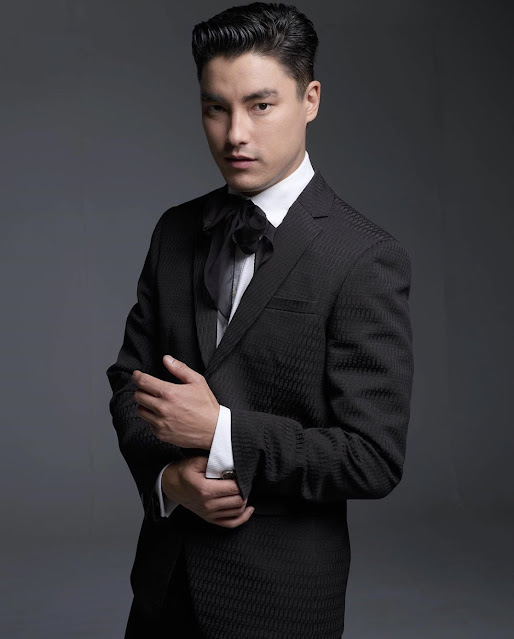 When I was reading Dheo's, I imagined Malaysian-Australian actor, Remy Hii as Dheo Han. That's why I fan cast Remy Hii as Dheo Han in my review of Dheo's. I believe Remy Hii is the most perfect to channel Dheo Han. Like Dheo, Remy is also a Eurasian, has dark hair and eyes, is charming, charismatic, suave, intelligent,  and talented in arts and music. Plus, Remy can write and do work with his left and right hands just like Dheo. And as a fan of Remy Hii, it has always been my dream to see him playing a character with a dark, mysterious, and enigmatic aura. If any filmmakers want to make Dheo's a film or TV series, please cast Remy for this role. I'm sure he will carry the character well and make people love Dheo Han even more. Hehehe ^_^

Dheo Han doesn't have a good lively childhood like other people even though he was from a very wealthy family. Dheo was the prince of the D'Ambrusion clan. D'Ambrusio was a very powerful mafia clan and family. As a mafia prince, Dheo was trained in violent things at a very young age ~ fighting, martial arts, and weapons.

Dheo's mother, Alessandra D'Ambrusio hated violence. Alessandra doesn't want her son to grow up as a violent person. She doesn't want Dheo to become a mafia either. So Alessandra left Dheo with his father in Malaysia when he was only a small child. Alessandra then returned to Sicily, Italy alone.

But when Dheo was five years old, the D'Ambrusio clan found him. They kidnapped him and took him to Sicily. When Dheo was a teenager, his mother passed away from heartbreak. All her plans for her son failed. She could not protect him from her own family.

When Dheo was 18 years old, he traveled to Malaysia to look for his father. But unfortunately, Dheo found out that his father had passed away too. Dheo was sad. From this moment, Dheo stopped believing in god. To Dheo, god doesn't exist. 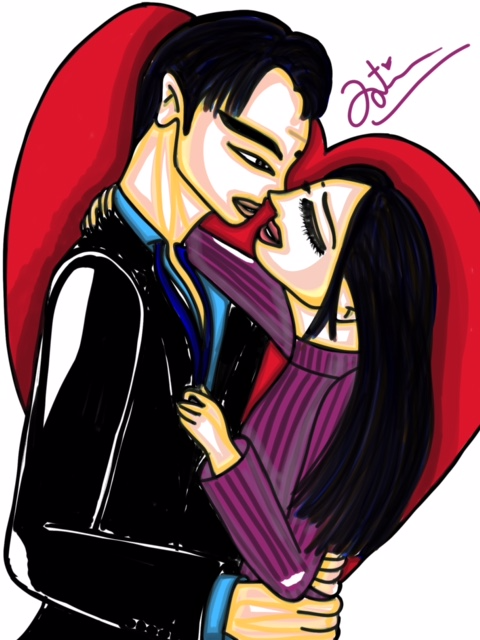 After completing high school, Dheo went to London, England to pursue his studies. In London, he met Rose. He instantly fell in love with the innocent beauty. Falling in love with Rose made Dheo believes in god again. And he chose Islam. Dheo reverted to Islam and changed his name to Muhammad Fateh.

Not long after that, Dheo and Rose became husband and wife. They had a very happy life together in London. But Dheo's past would not just leave him behind. Rose became a target to the D'Ambrusio family and Dheo's other enemies.

One day, Rose was kidnapped by one of Dheo's enemies. But Dheo managed to save his wife. Dheo and Rose got into an accident. They were running away from their enemy at that time. Rose ended up in a one-year coma after the accident. She also lost her memories due to the accident. Dheo was not badly injured in the accident. He only ended up with a scar on his left forehead. Dheo hated the scar a lot. To Dheo, the scar was a sign of his failure to protect his wife. Later in the story, Rose convinced Dheo that the scar was beautiful and it was a sign of Dheo's strength and bravery. 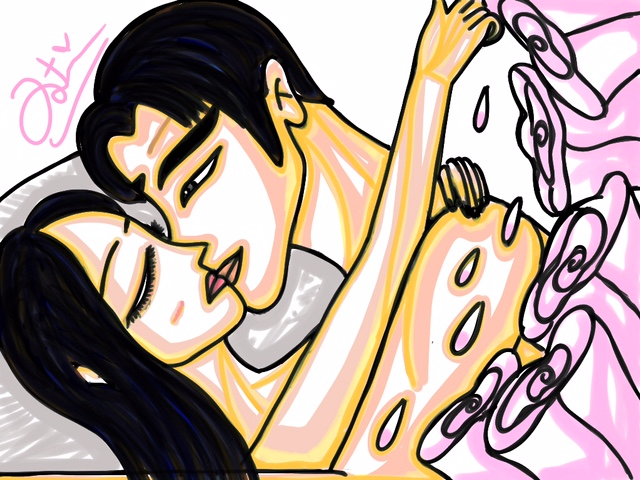 I like everything about Dheo Han. I like his personality ~ charismatic, charming, suave, intelligent, brave, bold, confident, kind-hearted, romantic, and tender loving. His handsomeness comes without saying. Hehehe ^_^  Anjell also portrayed Dheo Han as a very good leader. Yeah, he has good leadership. And I like a guy with good leadership. Oh wow... I will marry this guy if he is real. Hahaha ^_^

Here's a reminder to myself and all the single girls out there... if you meet someone like Dheo Han, don't ever let him go. He is worth keeping, ladies.

Before I end this post, I would like to ask my female readers some questions. Have you read Dheo's by Anjell? If yes, did you ladies have a crush on Dheo Han while you were reading this novel? And is Dheo Han your favorite Anjell hero? My answer to the third question is yes! Dheo Han is my favorite Anjell hero even though I like all four Anjell heroes from the four novels I've read. Dheo is the best! And he will always be!

Ok, this is all for now. Thank you for reading this post. I'll see you guys again in my next post. Insya-Allah.