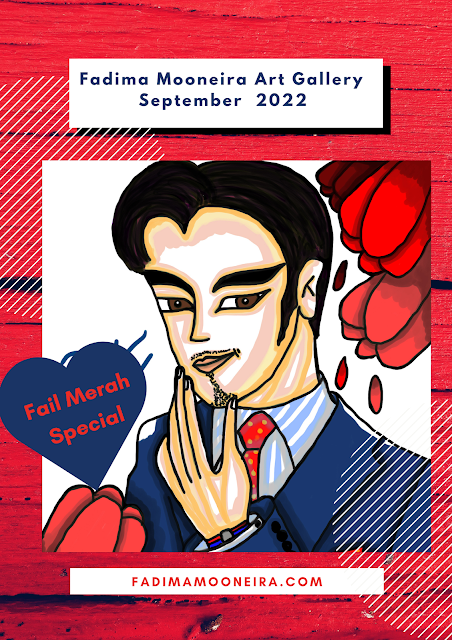 Welcome back to Fadima Mooneira Art Gallery. I'm back as your host and tour guide again. So please be my guest. I hope you guys are excited about this month's tour because I am feeling all excited now ^_^

For those who don't know yet or missed my previous post, I just published my first novel, Fail Merah last Monday, the 29th of August 2022. From now on, this date will be a date for me to remember and celebrate for the rest of my life. Syukur Alhamdulillah. I'm feeling grateful for my latest achievement. And I hope to achieve more in the future. Insya-Allah.

So for the September art gallery, I'm going to share my artworks for Fail Merah with you guys. These artworks are illustrations of Fail Merah's characters and scenes in the story that I draw to keep myself motivated in my writing journey.

Before we begin our tour, I would like to inform you guys that all artworks in this gallery are drawn using iPencil, iPad Pro, and the Adobe Fresco app. So let's not waste time and check out the first artwork of this month's gallery... 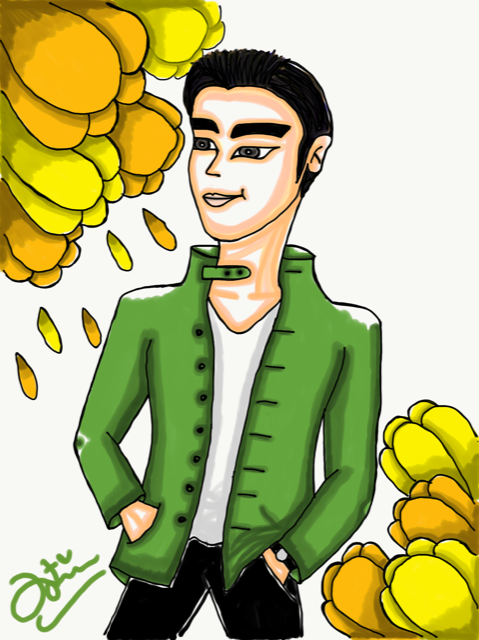 Ladies and gentlemen, boys and girls, the first artwork of this month's gallery is an illustration of Faiz Ashraf (Ashraf). Ashraf is the antagonist in Fail Merah. But he is not a villain. Ashraf is actually a very nice guy. He is very good-looking, well-dressed, well-mannered, polite, quiet, and shy. Ashraf is Dahlia's (the protagonist's love interest & heroine) best buddy. Ashraf secretly likes Dahlia, but unfortunately, he is too shy to tell her. Ashraf got heartbroken when Dahlia marries Emil. He also becomes very jealous of Emil. DRY (the villain) finds out about it and uses Ashraf as his bullet to hurt Emil.
Ok, this is all about the first artwork and Ashraf. Now let's check out the second artwork and character I'm going to introduce...
#2 DAHLIA JAMILAH THE LOVE INTEREST 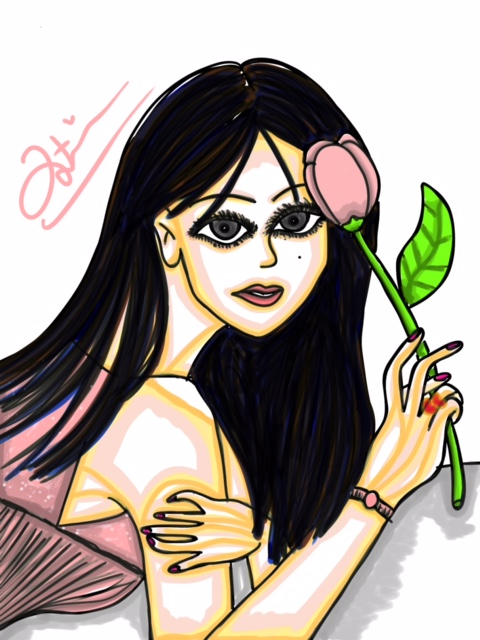 Ladies and gentlemen, boys and girls, we are now looking at the second artwork of this month's gallery. The second artwork is an illustration of Dahlia Jamilah. Dahlia is the protagonist's love interest and heroine of Fail Merah. Dahlia is beautiful, sweet, petite, adorable, charming, charismatic, intelligent, and kind-hearted. Dahlia is a lady diplomat in her 20s.  She likes music and arts, loves to read, travel, do charities, and help those who are in need. FYI, this character is modeled after my girl-crush and Hallyu sweetheart, IU. Like IU, Dahlia also has dark hair & eyes, and snowy fair skin.
Alright, now let me introduce the next character to you guys, and let's move to the third artwork...
#3 EMIL MUHAYAT THE PROTAGONIST 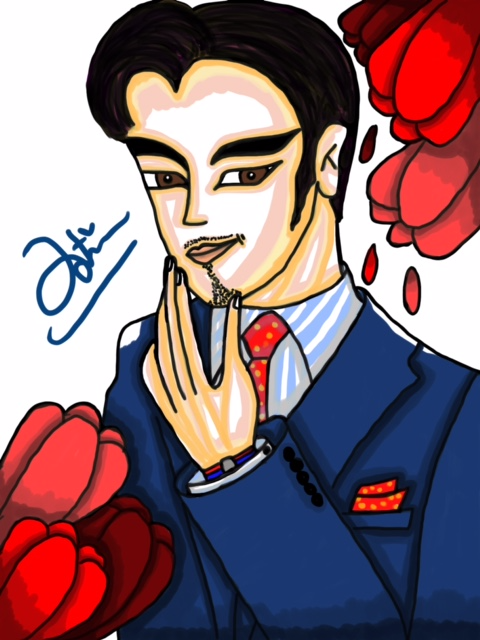 Taadaaa!!!!!!!!!! Since I already introduced the antagonist and love interest, now it's time for me to introduce the protagonist/main character to you guys. Guys, meet Emil Muhayat. He is the protagonist and hero of Fail Merah. Emil is a very handsome, intelligent, charismatic, charming, confident, and bold diplomat. He strongly believes in integrity which makes him good enough as a hero. But at the same time, he also believes in revenge which makes him bad enough as a villain. Emil is a morally grey character. Emil is 5 feet 11 inches tall. He is masculine and has perfect physics. He's visuals are stunning. Emil has Asian skin and looks. He also has black hair and dark brown eyes. His electrifying eyebrows are his distinguishing features. I created Emil after my man-crush, Remy Hii. Remy Hii is one of my main inspirations and motivations to write Fail Merah. And so is IU. To see Remy and IU as an on-screen couple has always been my dream. So to make this dream half come true, I created my main characters in Fail Merah after them ^_^
Alright, now let's check out the fourth artwork...
#4 EMILIA MUHAYAT 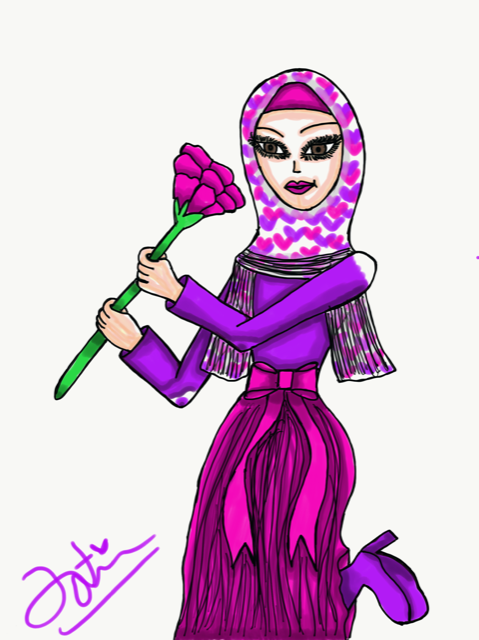 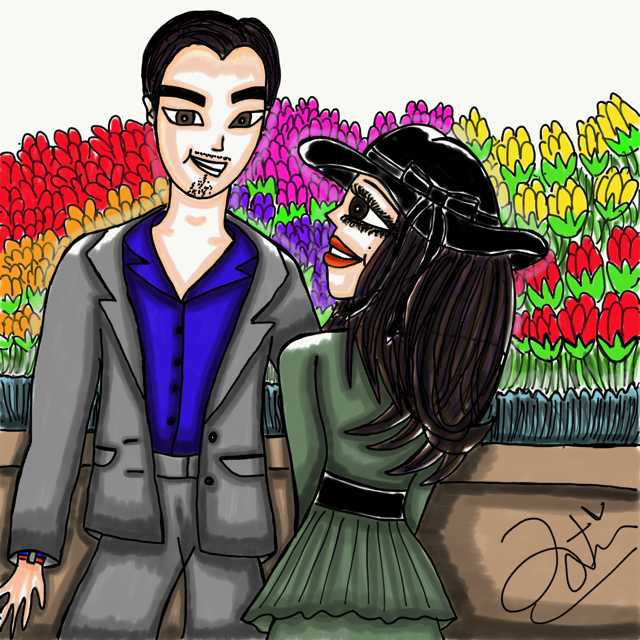 Ladies & gentlemen, the fifth artwork is an illustration of Emil and Dahlia enjoying their cute street date at the Flower Market in Amsterdam. This illustration is a scene from Fail Merah's Chapter 15: The Confession. I believe this chapter is very cute. This chapter is my favorite chapter in Fail Merah. In this chapter, Emil asks Dahlia to accompany him to explore the city of Amsterdam since their seminar ended early. At the end of the date, Emil takes Dahlia to the Flower Market. Dahlia is happy and excited to see her favorite flower, tulips right in front of her eyes. And at the market, Emil says something surprising to Dahlia. Do you guys wanna know what Emil says to Dahlia? If yes, you guys gotta purchase and read Fail Merah. Hehehe ^_^
If you guys are interested to purchase Fail Merah, you guys need to check out my previous post. I already introduced Fail Merah in my previous post. I will share the link with you guys at the end of this post. So please read the post till the end if you're interested in the novel, Fail Merah. Ok, now let's move to the sixth artwork...
#6 EMIL & DAHLIA'S WEDDING 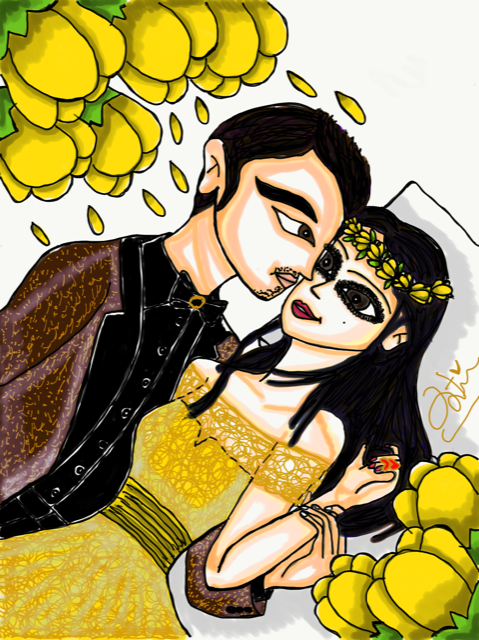 Emil and Dahlia become husband and wife in the middle of the story. So the sixth artwork is an illustration of their wedding. Yellow is the color theme of their wedding. And yellow is Dahlia's favorite color. Emil and Dahlia's wedding is the beginning of the story's part two, where a second conflict arises. Emil and Dahlia's wedding is not a lavish event. But it is still a lovely one. And tulips are the flowers of the event.
Ok, this is all for the sixth artwork. Now let's move to the seventh artwork...
#7 THE HUNK IN BLACK & THE BEAUTY IN WHITE 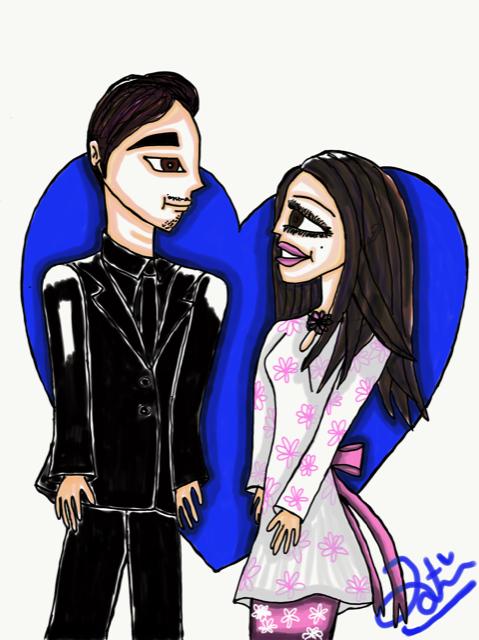 Ladies and gentlemen, boys and girls... we are now looking at the seventh and last artwork for this month's gallery. The seventh artwork is an illustration from a scene in Fail Merah's Chapter 6: Dahlia Jamilah Is She. This is the chapter and scene where I introduced Dahlia to readers. This scene is also the first time Emil meets Dahlia. He is already attracted to her. Emil is in all black. Dahlia is in white. In this scene, Emil and Dahlia chat about Terracotta Warriors. They share their opinions about the historical hotspot in China. Dahlia sees Emil as mysterious but charming.
Ok, so these are the seven artworks from Fail Merah that I selected to share with you guys in this month's gallery. I hope you guys enjoyed this gallery.
FYI, Fail Merah is a self-publish novel. So this novel is not yet available at any bookstores in Malaysia. If you're interested in the novel, you can purchase it from me. So for those who are interested in Fail Merah, please feel free to click on this link >> INTRODUCING MY FIRST NOVEL, FAIL MERAH (PLUS FIVE INTERESTING FACTS) In this post, I shared some information on Fail Merah, my experience writing the novel and getting it published, the novel's blurb and cover, how to purchase it, and five interesting facts about the novel. So please check it out. You guys can also DM me on Instagram @mughunghwa or email me at garnet.earthtiger@gmail.com to purchase and ask for more information on the novel.
The Fadima Mooneira monthly art gallery tour will be back next month. Insya-Allah. I also will be sharing more artworks for Fail Merah in next month's gallery. So please don't miss out. Any updates on the Fadima Mooneira monthly art gallery tour will be shared on this blog, my Facebook Page, Twitter, Instagram, and Artstagram. Please follow my socmed accounts so that you won't miss out on any updates on the Fadima Mooneira monthly art gallery tour. And do follow my Artstagram @fmooneira_art if you like my artworks ^_^
Ok, this is all for now. Thank you for reading. I will see you guys again in my next post. Bonne weekend and khungang haseyo ^_^
XoXo,
Fadima Mooneira ^_^
(Author of Fail Merah)
PS: ALL ARTWORKS IN THIS GALLERY ARE MY ORIGINAL. IF YOU WANT TO USE THEM FOR YOUR WEBSITE, BLOG, AND SOCMEDS, YOU NEED TO ASK FOR MY PERMISSION FIRST. YOU ARE ALSO REQUIRED TO CREDIT ME ON YOUR WEBSITE, BLOG, AND SOCMEDS. THANK YOU ^_^
#FadimaMooneiraArtGallerySeptember2022 #ArtGallerySeptember2022 #September2022 #FailMerah #AdultRomanceNovel #RomanceNovel #JustReleasedNovel #FadimaMooneiraWriter #FailMerahFanArt  #BeCreative #BeArtistic #FadimaMooneiraArts #iPadPro #iPencil #AdobeFresco  #Arts #Edutainment #FadimaMooneiraDotCom
READ MORE ABOUT FAIL MERAH