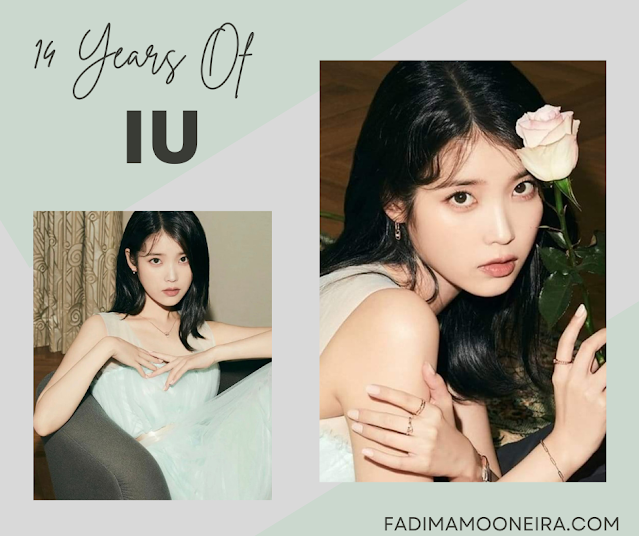 South Korean sweetheart, IU will be celebrating her 14th anniversary tomorrow, the 18th of September 2022. And as a UAENA, I would like to share a special post about IU today with you guys ^_^

IU is my no.1 girl-crush. She's one of the Asian female celebrities that I look up to as a role model. I admire IU for her talent, charisma, X-Factor, courage, hard work, go-getter spirit, generosity, kindness, beauty, elegance, and clean image. But what fascinates me the most about IU is her journey to success. IU's life wasn't a fairytale before she became a superstar. IU had a hard childhood. She grew up in poverty and even failed her first audition. She was also once conned by a fake recording agency. Even her first performance was not a success. 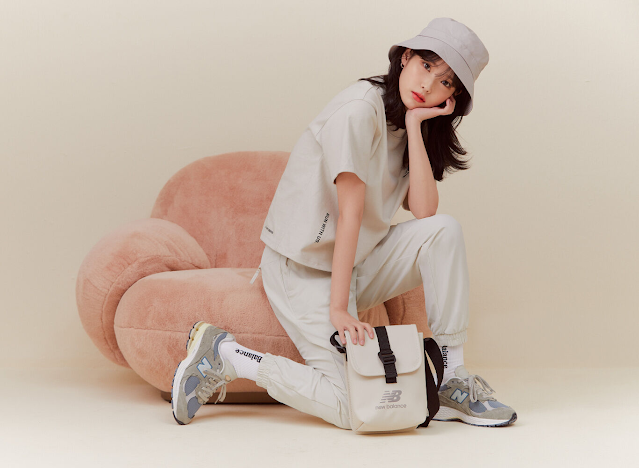 IU made her debut as a singer and songwriter in 2008 on a South Korean music TV show called M! Countdown. IU was only 15 years old at that time. During her first performance, IU did not get applause or any reaction from the audience at all. They totally ignored her. In show business, being ignored is also the opposite of love even though you did not get a 'boo' or any bad comments. But IU did not give up on her dreams. She believes in herself and her dreams. IU sees her failure as the beginning of her success. After her unsuccessful debut performance, IU worked hard and improved herself. IU's hard work, courage, and go-getter spirit made her the queen of K-pop and Hallyu that she is now. 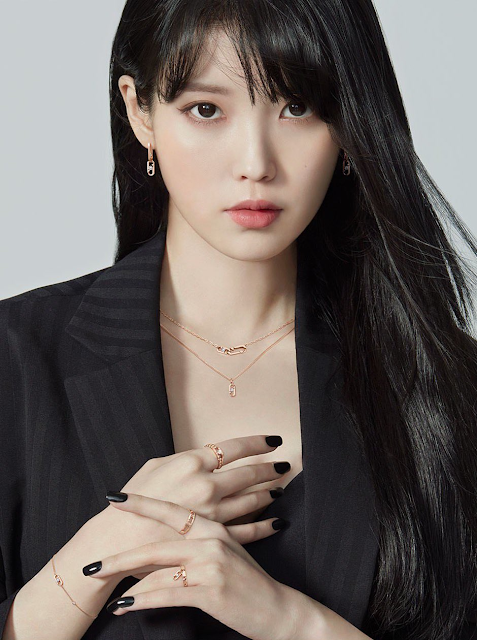 IU is now one of South Korea's most successful solo singers, songwriters, and actresses. She has won various awards as a singer, songwriter, and actress. Forbes Magazine has listed IU as one of the most influential celebrities in Asia. Even the American Billboard has also recognized IU as the all-time leader of the Korean K-Pop Hot 100 Chart with the most number-one hits, and the artist who held the number one position for the most weeks. 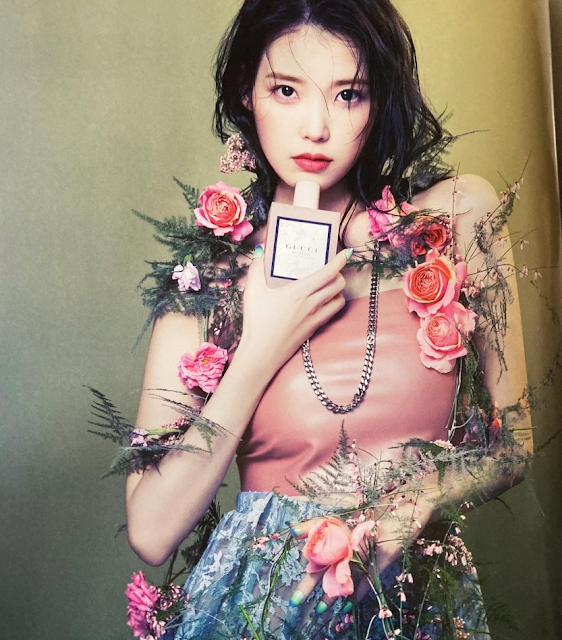 Besides being successful as a singer, songwriter, and actress, IU is also famous as a role model for young people, a commercial film queen, a beauty and fashion icon, and every guy's dream girl. She's a bae! IU is not only popular in South Korea and Asia, but she is also popular in the West now. And she is also not just popular among K-pop and Hallyu fans. Even those who aren't into K-pop and Hallyu also know IU. Since I already share a brief summary about IU with you guys, now let me share about IU as a star in South Korea, Asia, and the West ^_^ 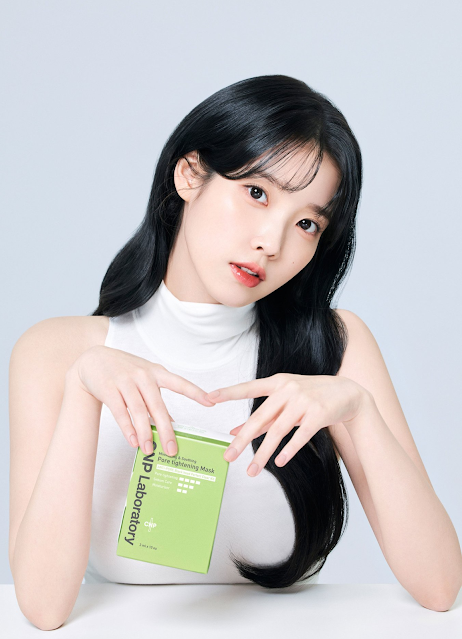 IU looks like a real doll in one of CNP Cosmetic's advertisements (Image: kpopmap.com)

IU is highly respected in South Korea for the qualities that she has. She's now one of the nation's goddesses and commercial film queens alongside Bae Suzy and Im Yoona. As a celebrity, IU has endorsed a lot of brands from beauty cosmetics to high-end fashion to sportswear to jewelry brands to F&B to electrical appliances,  and many more. When IU first became a celebrity, South Korea already named her the nation's little sister. 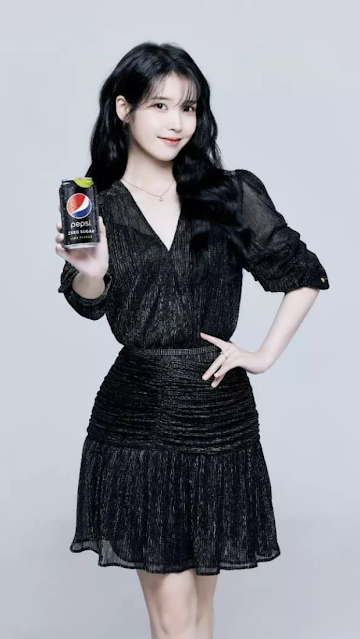 IU all glowing for Pepsi. Pepsi is one of IU's biggest endorsements besides Gucci (Image: soompi.com)

IU is also very popular in Asia besides South Korea. She has a strong fan base in Japan, Hong Kong, Taiwan, China, and South East Asia. IU also has a lot of celebrity fans from other Asian countries. Malaysia's Beauty And Brains icon, Dr. Soo Wincci admits that she is also a UAENA. Even Malaysia's no.1 badminton player, Lee Zi Jia also admits that he admires IU and names her as his ideal type. Wow!!!

IU IN THE WEST 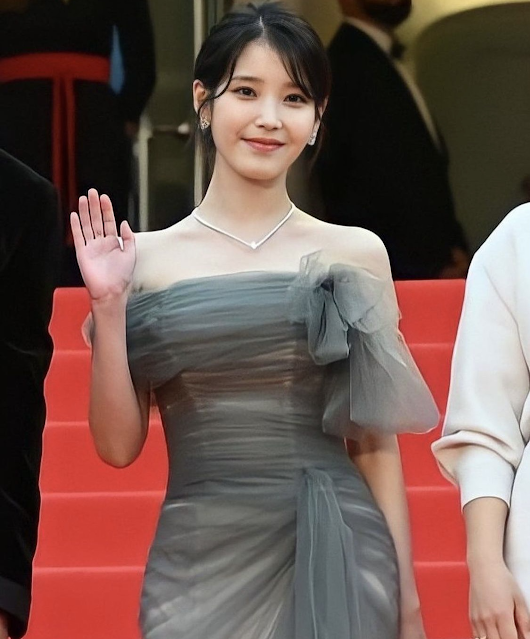 IU simply stunning at The Cannes Film Festival 2022 last May (Image: Vogue Singapore)
IU gained worldwide popularity after her success with Hotel Del Luna. Hotel Del Luna is a South Korean supernatural romantic comedy TV drama series. The drama was a huge hit back in 2019 and it is still one of the most watched K-dramas on Netflix. In Hotel Del Luna, IU played Jang Man Weol, a hotel owner and the protagonist of the drama.  Jang Man Weol was a very iconic character. The character was also a fashion icon. Playing Jang Man Weol put IU on the map of the world. Besides Asian celebrity fans, IU also has Hollywood celebrity fans such as Arden Cho, Post Malone, and NBA player, Steve Adams. 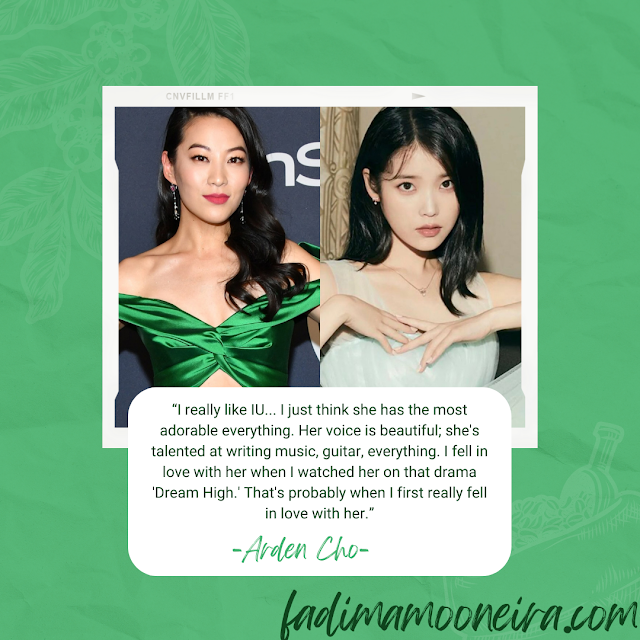 Partner Track actress, Arden Cho praises IU ^_^
Last month, IU attended the Cannes Film Festival 2022 in Cannes, France. She was there for the premiere of her latest film, Broker. IU charmed many international media, filmmakers, and fans with her charisma, elegance, and beauty. She received many compliments from international media.
IU's appearance at the event brings rumors that the beautiful actress could be on her way to Hollywood. There are so many international filmmakers interested to hire her for their films. As a fan, I hope this rumor will come true. It will be a dream come true for me to see IU making her debut in Hollywood ^_^ 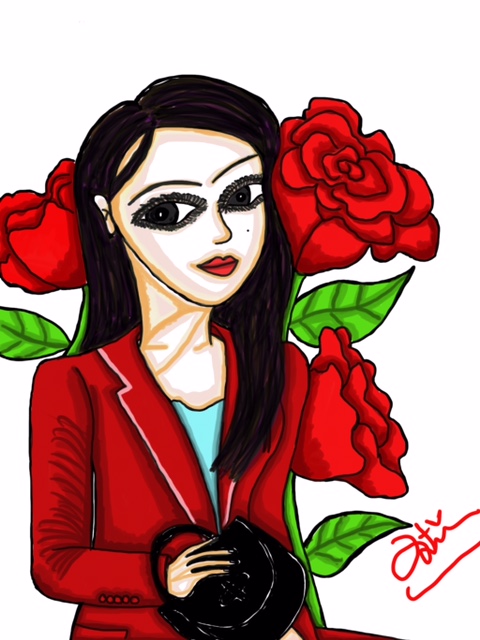 My fan art of IU ^_^ (Image: My Artstagram @fmooneira_art)
Ok, this is all I want to share about IU in today's post. To all UAENAs, IU will be back on small screens soon. She just signed up for a new TV drama series. And besides the new drama, IU also has another movie coming. Insya-Allah, her movie Dream (also starring Park Seo Joon) will also be released this year. Oh wow... I'm excited about Dream and IU's upcoming drama. And since the 29-year-old South Korean sweetheart will be celebrating her 14th anniversary tomorrow (18.09.2022), I would like to wish IU a very Happy Anniversary. And I hope that IU will continue to be more successful in her field in the future. Insya-Allah, I will be a UAENA for life ^_^
Ok, this is all for now. I'll see you guys again in my next post. Thank you for reading. Happy IU Day to all my fellow UAENAs as well^_^
XoXo,
Fadima Mooneira ^_^
#IU #14YearsOfIU #IUs14thAnniversarry #IUsAnniversary2022 #UAENA #LeeJiEun #AsianBeauty #BeautifulAsian #UlzzangGirl #Kpop #Hallyu #Hollywood #Celebrities #PopCulture #FadimaMooneiraDotCom

FIVE THINGS THAT IU, YOONA & SUZY HAVE IN COMMON